Working at the Beach Foundry

My first full time job was at the Beach Foundry in 1970. My father had worked there for 20 years at the time and he got me in. I lasted one year but he eventually worked there for 28 years, leaving just before the plant closed permanently. It was one of the last industrial employers in the old west end, which along with Sperry Gyroscope and Capital Wire in the two blocks north and west of the Parkdale market, provided employment for general and skilled labour for the local menfolk (the only woman ever to enter the production area of the plant was the nurse, and I don't know how she summoned the courage to do it.)  The building was torn down in the early 1980s and replaced by a condo and office complex, Holland Cross. Every time I walk through there, I feel the ghosts of the old Beach Foundry.

My first job was as a maintenance worker, with two main duties: 1) picking up discarded cardboard boxes from all the stations on the two assembly lines, loading them onto my push cart and taking them to burn in the foundry and 2) sweeping the concrete floor throughout the plant. So I got to know the inside of this dark, foreboding place, which had taken up a large place in my childhood imagination, in pretty intimate detail. Whenever we went to my father's work as children, which was a rare thing, we would meet him at the front office, at 75 Spencer Street, where there was a receptionist and, on display in the large front windows, electric and gas ranges, which was mostly what was produced there. We would never go inside the plant, which for us was exactly the "dark satanic mills" of William Blake's poem. Constant pounding noise, dark and grimy windows, which were grilled and through which you could not see, hordes of slightly scary men coming and going at all times (there were usually three shifts on the go). There could very well have been a sign above the entrance reading "Abandon all hope ye who enter here".  Here is a picture of the old place, taken in 1979. 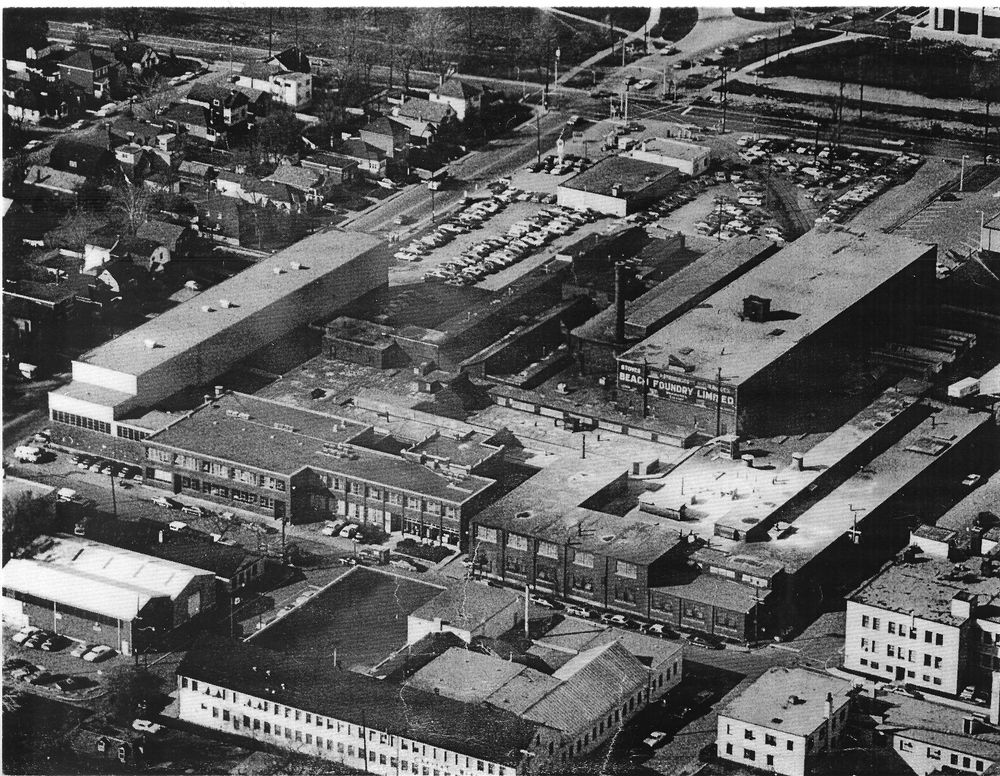 The view is from the Spencer Street side. You can see the front office on the street, and to the left the Alexander Fleck machinery plant. They had purchased the Beach Foundry plant in 1954 and added that building at that time. They produced mostly large scale machinery for the paper making industry.  At one time my father worked for them as well and they were making parts for the radars along the DEW line in the far North. To the right and going back towards Scott Street, you can see the old Beach Foundry Building. The assembly lines were along Spencer Avenue. The enamel plant was along the Hamilton Avenue side and so was the steel room, further back. You can see in the picture that there was still a rail line along Scott Street where the Transitway is now, and that a spur line ran across Scott right up to a loading dock at the back of the Beach building. Freight cars would be loaded full of electric or gas ranges (see picture) as were transport trucks at the docks at the corner of Hamilton and Bullman. 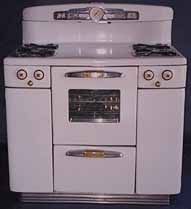 The heavy metal sound of the song suits the subject matter and the lyrics convey the sounds, images and feelings from my experience working there. Lots of heat imagery, burning, blackened, searing skin, singing brows. There was an actual foundry in the back of the plant, on the Scott Street side. There, you could see molten iron being poured into sand moulds to make cast iron parts. But my memories of really hot times come from my second job there. The official job title was Enamel Ware Inspector, and I inspected stove parts that had been fabricated in the Steel Room and sprayed in the Enamel Plant. But first I had to take these parts off the "chain", a constanly moving conveyor on which the sprayers hung the parts they had sprayed with enamel and which slowly made its way into and out of the annealing oven. This was a chamber maybe fifty feet deep at the end of which elements burned at 1500 degrees celcius or something, which baked the enamel onto the metal. Fifty feet later the parts were back out and, wearing asbestos gloves, my partner Rolland and I would take them off the chain, take a quick look for any defects in the enamel, and then load them onto carts, which would be wheeled to the assembly lines. Now that was HOT work!

The middle part of the song has a more tender sound and melody. It is specifically about my father, the man of steel (to us, he was both Superman and he made stuff out of steel at his job as a tool and die maker). For some years when we were kids, we didn't have a car. As we lived on Holland avenue, close to the Beach Foundry, my father would take his bike to work. It was a very familiar sight for us to see him, on his bike, down the street, going back to work after lunch.

When it closed in 1980, after 60 years of operation on that site, it put a lot of people out of work, including my dad, hence the line in this song "Out on the street after 28 years, abandon all hope ye who enter here".