Have you ever been for a walk down Wellington Street?

Exotic, mystical, scary, exciting, interesting. Taking a walk down Wellington Street can be  all of those things. Everything happens on Wellington Street. It is an old street, full of stories, full of lfe. Fifty years ago, and still today, it is a bustling and lively place. Running from the railway tracks to the east, to where it turns into Richmond Road to the west, it is the commercial artery of the old west end, drawing people from all over the neighbourhood, and further afield.

Going to the movies at the Elmdale theater, playing games and sport activities at the community centre, meeting friends at the restaurant, buying everyday needs from local businesses, or failing that, taking the 2 to go downtown, these are the vignettes of times and places circa 1965 that the song Wellington Street tries to evoke. Drawing on my personal experiences, it turns out that local stores and businesses figure prominently in my recollection of them. (See the lyrics under the Music tab of the website).

In the chorus, the first business mentioned is West End Sweets. This was on old soda shop, already past its prime in the mid-sixties, which was located at the corner of Wellington and Carruthers, where a baby store is today. Dark wood panelling, wooden benches and booths, with 3 for a quarter juke boxes in each, it was the perfect hangout for having a Coke and order of french fries with your buddies. The building in which it was located is quite distinctive, the Iona Mansions, built in 1912. At the end of the chorus, another business is mentioned, the Purple Cow. This was a restaurant, across the street from the Elmdale House, just a small greasy spoon, with a memorable name. GoGo Pizza was located there a little later, competing with Cicero's Pizza down the street. Now, it is the home of the Back Lane Café, a very cool new eatery in what is now becoming a prime foodie destination in Ottawa (and where Jimmy, the bass player for the CD release gig, works as a sous-chef).

In the first verse, the action takes place across the street from the Elmdale House. This is also where the CD release party will take place. It is one of the three taverns in the old neighbourhood, along with the Stirling Hotel, now converted to social housing, and the Carleton Tavern, still in business. The Elmdale has reinvented itself as a prime live music venue in Ottawa, while retaining exactly its old-timey tavern character.

The verse ends with the Reward Shoe store, which was located at the corner of Pinhey and Wellington, where Morris Formal Wear is today.

(And a nice shoe store it was. Very fashion, like the pointy grey suede shoes I am wearing in this picture, circa 1967!).

The old west end was like a village, where you could find pretty much anything you might need within walking distance.  Just on this one block, there was the Reward Shoe store, a jewellers, Cicero's Pizza, Bachenski shoe repair, St Louis bicycle and bicycle repair shop and Classic Cleaners. Across Merton street, Rolly's Men's Wear, for your cool mod duds, the Caisse Populaire, Victoria Pharmacy and the Allied Food Store.

In the second verse, we stop in at the A&P, located where Heavens to Betsy is today, at the corner of Stirling. This was an ancient grocery store, with thin strip hardwood floors and a tin ceiling. A&P had started its Canadian division in 1927 and it looked like the store came from that era. The first thing that struck you when you opened the door was the smell of fresh roasted coffee. 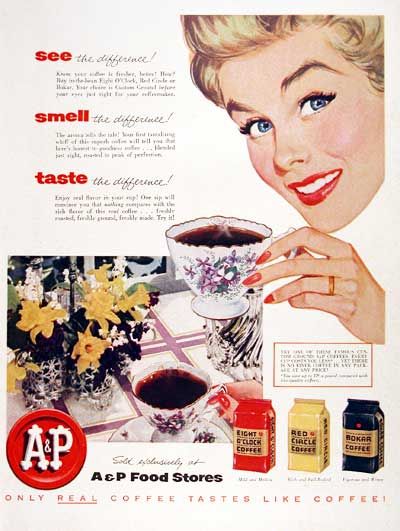 A&P prided itself on the quality of its whole bean coffee, Eight O'clock Coffee, which was ground and bagged right in the store, sending this delightful aroma wafting all through the store. As a kid, you would just open the door and take a whiff.

Across Stirling, there was a coin wash, and another one at the corner of Fairmont and Wellington. Old houses + mostly renters + lots of kids = lots of laundry. During the winter, lugging a couple of bags of wet laundry to the coin wash for your mom so you could use the spin dryer was hard work. But rewarding. It was warm, and you never knew who you might meet there. The girl next door, or down the street or on the other block...

Because meeting girls was of course one of the main reasons for taking a walk down Wellington Street, and there was no better place for this than "The Man", short for The Manhattan. Going to "The Man" for a cup of coffee and a plate of chips with gravy, well that's a whole evening right there. It was located right next to what is now Cozzy's, which used to be location of the local LCBO - everything in walking distance. (This was the kind where you would fill out a slip of paper with what bottles you wanted and brought it to the counter, where guys would bring it out from the back!). This block, between Fairmont and Irving, is now the location of another very cool eatery, the Hintonburg Public House, which I can personally recommend, having enjoyed a fantastic party there for my 60th birthday in March.

The verse ends with "Tai Hong Chinese", which was just east of Rosemount on the south side of Wellington. The orignal sign still hangs in front of the business that is there now but it is hidden. It was a classic, with marquee lights all around. In the video for Wellington Street, on my Facebook page at www.facebook.com/jonesey.page, I have tried to recreate it. It's a pretty good likeness. The Tai Hong was strictly a take out place, with a counter and a couple of chairs. We would sometimes order just an Almond Cookie for take out, nice night time snack. They didn't seem to mind. There were two other Chinese take outs on Wellington, the Song Hee near Irving and the Sun Kwong, at the corner of Hinton, where you could also get fish and chips.

In the bridge section of the song, "upstairs at the United" refers to the United Five and Dime, which is where the Giant Tiger is today. It was a standard variety store, like Woolworth's and Kresge's. Five and Dime stores then were much better than dollar stores today. Go figure. There was a pool hall upstairs, mostly snooker tables, which you accessed from the side door. The young man who runs in trying to hide from the police, which is what this vignette is about, I imagine had tried to steal stuff from the Neighbourhood, meaning the Ottawa Neighbourhood Services store, which was located at the corner of Garland. It was a used goods store, with three floors full of stuff, which also served as a sheltered workshop for handicapped people. Check out this 1962 article from The Citizen. Stealing from this place would have been the lowest of the low thing to do. The ONS still operates in Ottawa, as it has since 1932.

There are so many more stories and interesting places to talk about up and down Wellington Street, but the song already runs over five minutes and you gotta stop somewhere.  More old west end stories to come in future blogs.